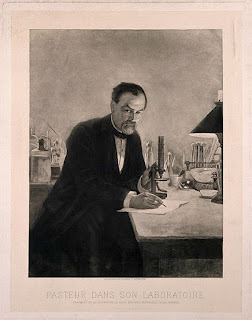 Louis Pasteur began his life only as a chemist. But,. later he came to the known for his Pasteurisation, Anti-rabies vaccination etc. During his time, people were highly superstitious over the diseases they suffered from. It was Pasteur who brought in a revolutionary change in so far as the curative measures for the diseases are concerned.

Louis Pasteur was born in a village called Dole in France, on the 27th December, 1822. His father was Joseph and his mother was Ethia Neil. His father was a soldier and he wanted Louis to become a teacher in the local secondary school. Pasteur had his primary education in Abroi City. But, he could not pursue his studies due to family conditions. Later, he studied at Ecole Normal School in Paris. He could not continue his studies there also. In both these schools, he proved to be a weak-minded scholar. On his return to Abrol City, he joined a college by name Jobenson College where he completed his graduation. During his college days, he came under the influence of a famous scientist Dumas through his speech. Duma's lecture inspired the young Pasteur to aspire to become a chemist himself. After his graduation, Louis procured his doctorate over his thesis.

As a student Ecole, he started working as an assistant to Professor Laurent in his Laboratory. This gave Pasteur an opportunity to make careful studies of crystals of tartaric acid. Soon, he discovered the crystal facets of two types, some to the left and some to the right. Pasteur believed these aspects are asymmetrical and that he could create life under the influence of asymmetric faces. But, by this time, his attention was drawn towards a solution for the problem on fermentation. At this juncture, he married Mary, daughter of the chief superintendent of the University of Stransberg. Now, Pasteur started working on the various problems with added zeal with the guidance of his beloved wife. 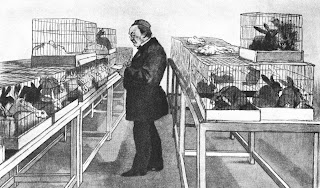 Fermentation is a chemical cause to change certain materials from their original status. As for example, wine is produced by the fermentation of grapes which in turn may turn to vinegar by fermenting into acetic acid. So also, milk turns sour when its sugar content turns into pectic acid. The conditions under which fermentation takes place were not properly understood by scientists. Pasteur made a detailed study on the issue and developed a 'germ' theory on fermentation. According to this theory, all the changes in the materials due to fermentation are caused by various kinds of organisms visible only under a microscope and these micro- organisms, as they are called could be controlled by heat. This observation led Pasteur to the vital Pasteurisation Process used even to-day to safeguard the milk which would have otherwise become a disease-carrier. This won him the honour of being the Member of the French Academy of Science in 1864.

The attention of Pasteur was drawn towards a disease that attacked the silk-worms in France and the silk-industry had come to the verge of extinction. Pasteur decided to detect the bacteria that could have caused this havoc. He suggested that the disease 1 silk-worms be set aside from the healthy ones for his observation. People criticised this suggestion of Pasteur. Despite his affliction from a paralytic stroke, the undaunted Pasteur conducted experiments and became successful. This saved the Silk Industry of France and the Italian Government honoured him by Christening one of the Silk-worm rearing centres with his name.

Louis Pasteur had known by his experiments as to how micro-organisms can bring in certain influential changes in the human body. According to this, Pasteur had found out that the condition of a patient who has undergone surgery would become from bad tr worse if the surgeon's hands, surgical instruments, the surgeon's dresses are not sterilised which otherwise transmitted innumerable harmful microbes into the patient's body through his blood, during the surgery. To ward off this hazard, Louis Pasteur said that the surgical instruments may either be soaked in antiseptic solutions or boiled in hot water before they are used for surgery. This method of sterilisation, as it is called saved patients from death after surgery. 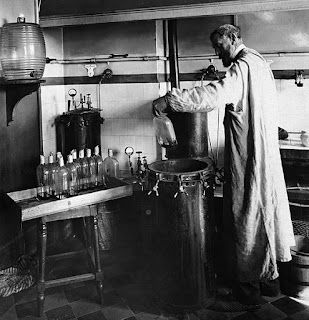 If Pasteurisation and Sterilisation were the hall-mark discoveries of Louis Pasteur, his work in overcoming the spread of a disease called Anthrax on cattle won him world-wide recognition. He separated out the bacteria, inactivated them and vaccinated them into the cattle through the blood and by this method he proved that the disease may not spread and may also save the cattle from death. By this, it was established that if the harmful bacteria had to be controlled, the same type of bacteria had to be cultured and inactivated by killing them and let into the sick through the blood; this not only helped in saving the sick but also in controlling the harmful bacteria. To prove the efficacy of his discovery. Pasteur vaccinated a few diseased cattle and didnot vaccinate the diseased sheep of Frane in 1881. The vaccinated cattle survived while the unvaccinated sheep died. This scientific investigation of Pasteur is now known as Vaccination.

The most outstanding finding of Louis Pasteur is the Anti-Rabies Treatment. People of his time believed that dog-bite is incurable and that the dog-bitten animal or the human had to die miserably. People would burn the bitten portion of the human by means of a burning iron rod or would cut off the flesh of the bitten portion. Pasteur decided that he must see that this rude and superstitious practice must be put an end to. He began to work on the possibility of a vaccine for this condition which is known as hydrophobia caused by a dog-bite. For this, he started rearing different species of dogs and bitches and curs and experimented on them. This led him to discover the saliva of dogs contained harmful microbes. These microbes became activated when they got themselves lodged either in the brain of the person of in his vertebral column. Unmindful of the risk he was undertaking, Pasteur sucked into his mouth the Saliva of dogs, prepared a vaccine out of it and vaccinated it into the blood of a nine year oid hydrophobic patient - Joseph Myster. This treatment was made for a period of 14 days and the patient was cured amazingly. Following this, hundreds of such patients survived from this fatal disease.

Besides these therapeutic inventions, Pasteur carried on extensive studies on gangarene, blood-poisoning, child-birth- fever etc. All his studies prove that living things are generated from inaminate matter; i.e.; inanimate organic materials are the birth-places of microbes, some of which are deadly to humans and other animals.

Louis Pasteur was a great humanitarian and an eminent chemical scientist who dedicated his life for the invention of many precautionery measures to save lives. For his contribution to the world of chemistry. one of the Emperors of Russia conferred on him a Diamond Medal and offered financial assistance to build a Research Centre.

Louis Pasteur, a great and brilliant scientist of the last century died on 27th September, 1895 and his grave was erected in the same institute where he conducted his experiments till his death.