HIPPOCRATES
Hippocrates was born on the Greek Island of Cos. His father was a priest. He was intelligent, yet devoted to gods. Very little is known to us about his personal life. According to the famous Greek philosopher Plato, Hippocrates was a medical doctor. He wandered far and wide among the Greeks and thus he became a Self- made wiseman. Till Hippocrates became to be known to the people as a healing doctor, all the medical treatments were in the hands of the priests who worshipped Aesculapius God. Aesculapus was the Health God of the Greeks. In those days, the Greeks were made to believe that people suffered from diseases because of the displeasure of Gods, and the sick people had to go to the temple and accept ointments and medicines from the priests only. Though Hippocrates did not believe in this mode of healing the patients, he had to tolerate it as he was not a person who didnot believe in Gods; as an evidence to this fact, the world famous Hippocrates Oath contains the prayers made to invoke the blessings of Gods like the Apollo.. Hippocrates believed only in the facts ascertained by experiments and observations in treating patients suffering from diseases. He opposed the then prevailing superstition, experiments in the matter of investigation of diseases. Hence, he once quoted. "diseases are not god-sent to be taken back by gods". Every disease had its own explanatory cause and if we could detect this element of physical cause of the disease, they may be treated to cure it. I do not believe that patients may be treated if they sleep in temples and offer prayers".
In the treatment of diseases, Hippocrates adopted the method of observing certain rules of Nature. He believed that the doctor has to patiently wait and observe the effects of his treatment of the diseases depending upon Nature.
According to him, Nature is the Best Healer. In the treatment of diseases, Nature plays an important role. Hippoles insisted that a physician should record the series of changes that he noticed while treating a patient and also keep a Medical Chart for the progress of the patient under treatment. He also noticed the effects of the climate, place and the seasons on the patient in curing the various types of diseases.
In the maintenance of good health, Hippocrates advocated these facts:
1. Creation of healthy or sick-free atmosphere and
2. Development of personal or individual habits.
By paying importance on these facts, he held the view that "PREVENTION IS BETTER THAN CURE".
Hippocrates had known very well the scientific effects and values of efficacy of Hydrotherapy and its therapeutic qualities. He used a mixture of hot and cold weters in turns for the treatment of fever. wounds, body-pain etc. He demonstrated as to how cold-water bath would give comfort to man, retaining the body-temperature also. He also advised to patient suffering from tuberculosis to have sun-bath, to live on good food and drink a lot of fresh and good milk; the patient was cured of T.B. In all these treatments, Hippocrates was successful solely because of his scientific approach - experimentation, observation and inference. 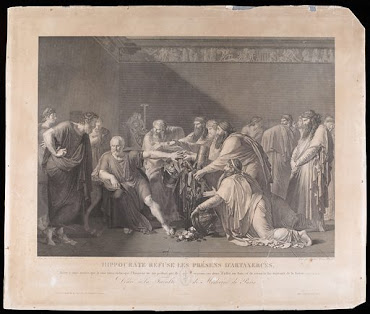 Hippocrates firmly believed in Nature as the Best Physician in curing diseases. 'Nature', according to him. has its own method and she is an adept in curing diseases. The adeptness of the doctor lies in its proper use of nature and its laws. It is, therefore, apt to call Hippocrates "Father of Natural Medicine" rather to call him merely "Father of Medicine".
Hippocrates was not the type of doctor to become non-functional when once he cured the disease; he detected the causes and the symptoms of the disease he cured. He has given certain guidelines to doctors to examine the patients carefully and then to note down the symptoms of the diseases and to begin the treatment. He has also suggested certain procedures. The eyes, skin, body- temperature, patient's capacity of digestion have to be examined and deciphered and to make a careful study of the changes in the diseases because of variations in weather conditions, place etc. By such an investigation or case-study, it was possible for Hippocrates to believe that there was a close relationship between Cosmic Science and Medical Science.
With this type of interrogation and investigation, Hippocrates formulated an Oath for the future medicos in order to establish a set-goal in the service of patients suffering in pain and grief. The world-famous Hippocrates's Oath runs as follows:
"Into whatever houses I enter, I enter to help the sick; if anyone shows interest in learning this process of treatment for implementation, I shall offer guidance free of cost. My education is Law-abiding".
Getting Info...