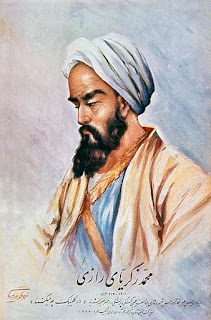 Abu Bakr Muhammad ibn Zakariya al-Razi, also known as Rhazes or Rasis, was a Persian physician, alchemist, and philosopher who lived in the 9th and 10th centuries. He was born in the city of Ray, which is now a suburb of Tehran, in 865 AD. As director of a large hospital in Baghdad, and the physician to the royal court, he engaged in medicine on a practical level. These experiences shaped his writings. He saw the importance of recordimg a patient's case history, and made clinical notes about the progress and symptoms of different illnesses, including his own. 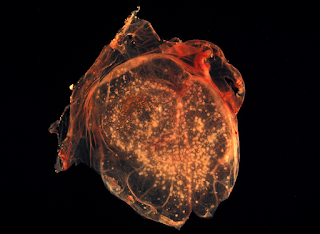 Al-Razi received a thorough education in a variety of subjects, including medicine, philosophy, and the natural sciences. He is known for his contributions to the fields of medicine and alchemy, and he is considered one of the greatest physicians in the history of Islam. One of al-Razi's most important contributions to medicine was his work on smallpox and measles. He wrote extensively on these diseases and developed treatments that were effective in preventing and curing them. He also made significant contributions to the fields of surgery, pediatrics, and ophthalmology. In addition to his work in medicine, al-Razi was also a skilled alchemist and philosopher. He wrote several books on alchemy and was one of the first to classify substances into organic and inorganic categories. He was also a pioneer in the field of psychology and is credited with being the first person to describe the concept of multiple personality disorder. Al-Razi died in 925 AD at the age of 60. His work was highly respected and influential in the Islamic world, and he is considered one of the most important figures in the history of medicine. One of his most important contributions was the discovery that smallpox annnnd measles were different diseases. Previously, they were lumped together simply as disease that caused rashes. However, through careful observation, Al Razi recorded the differences in appearance of the skin inflammations, as well as the accompanying physical symptoms. He deduced correctly, that they were indeed two distinct diseases. 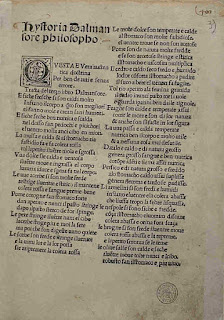 Al Razi wrote numberous books on arange of medical and scientific subjects. 'The Al-Mansuri' and 'Al-Hawi,' his encyclopedic reviews of medicine, were translated int several languages, and became a standard text for Persian and European medical student for centuries. Abu Bakr al-Razi made significant contributions to the fields of medicine, alchemy, and philosophy. Some of his most important contributions include: Medicine: Al-Razi is considered one of the greatest physicians in the history of Islam. He wrote extensively on smallpox and measles and developed treatments that were effective in preventing and curing these diseases. He also made significant contributions to the fields of surgery, pediatrics, and ophthalmology. Alchemy: Al-Razi was a skilled alchemist and wrote several books on the subject. He is credited with being the first person to classify substances into organic and inorganic categories. Psychology: Al-Razi was a pioneer in the field of psychology and is credited with being the first person to describe the concept of multiple personality disorder. Philosophy: Al-Razi was a philosopher and wrote extensively on a variety of topics, including ethics, politics, and the natural sciences. His work had a significant influence on the development of Western thought. Medicine and society: Al-Razi believed in the importance of understanding the social and environmental factors that can affect health and disease. He wrote about the need for doctors to consider these factors when treating their patients and argued that the provision of good healthcare was a social responsibility.